Will The Real False Prophets Please Stand Up?

While false prophets have plagued the American church since its foundation, it is clear that they have become more pronounced in the age of Trump.

For years, our ministry has been pointing out the spiritual blindness that pervades the American church.

With each passing week, it seems an unbelieving world and an embarrassed and heartbroken flock are faced with some new scandal or schism emerging from within the American Protestant community. This neverending stream of chaos and confusion is a disgrace to the gospel of Christ and serves to defame the way of truth.

Whether it is a greed-infested prosperity gospel that makes merchandise of the gullible for the sake of material gain, or whether it is a Trump-loving, trigger-happy, Republican-defending church leader making a mockery of the Christian faith for political gain, it is clear that false teachers have succeeded in permeating much of the American church.

And since the 2016 election of Donald Trump, the number of theological scams and religious heresies infiltrating the American church have become exponential. At the beginning of his term in office, many so-called “prophetic” voices began emerging in the church to reveal Trump’s “true” identity as a “modern-day Cyrus.” (It should come as no surprise that many of these same “prophetic” voices labeled Trump’s predecessor, President Barack Obama, as the Antichrist and warned he would destroy the Constitution and refuse to dutifully exit the White House after his second term.) Such doctrinal nonsense was further compounded when a myriad of so-called Christian “prophets” falsely prophesied a “guaranteed” Trump re-election, which failed to materialize.

In the wake of Trump’s devastating election loss in 2020, numerous unrepentant false prophets, having falsely prophesied a “guaranteed” Trump re-election, chose to double down on their false election prophecies rather than admit to deceiving and being deceived.

As if all of this weren’t bad enough, many American church leaders (and their duped followers) have also resorted to rejecting reality and facts regarding the current global pandemic known as COVID-19 in order to maintain allegiance to their political and economic philosophies.

And it’s not just facts that are being rejected by some church leaders and their followers. Indeed, specific “endtime” prophecies taken directly from the Bible have been ignored or twisted and taken out of context.

VIDEO: Ignoring Bible Prophecy To “Own the Libs”

For centuries, many American evangelical church leaders and self-styled Christian “prophets” have warned that the return of Christ is at hand. Along with these end of the world pronouncements, a long list of prophetic “signs” are cited, which are said to signify the imminent return of Christ to the earth. 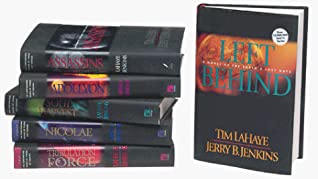 The “Left Behind” book series

These prophetic “signs” include warnings of an increase in natural disasters, violence, racial hatred, famines, pestilences, intense heat scorching the earth, and ironically, the rise of false prophets. (Just to name a few.) These signs are largely taken from Christ’s Olivet Discourse as found in Matthew 24, Mark 13, and Luke 21. However, others are found in the book of Revelation.

Therefore, it is interesting to note the reaction that the American evangelical church has had to two recent phenomena that seem to confirm the validity of these endtimes Bible prophecies.

Consider this brief graphic, which compares and contrasts the views held regarding these two phenomena by the Bible, Science, and Christians. 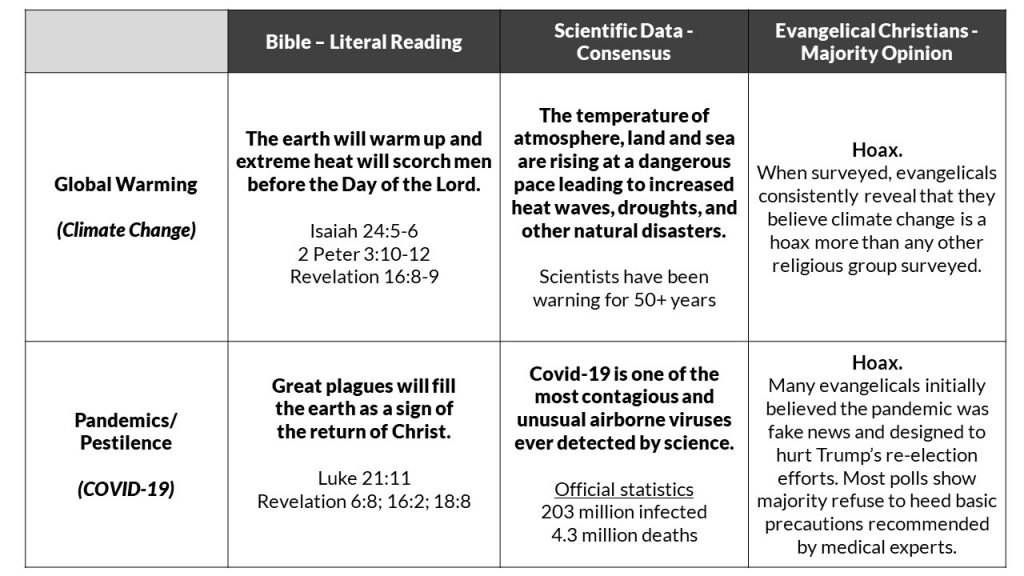 It is worthy of note that it was scientists, not evangelicals or so-called Christian “prophets”, that accurately warned the world about the rise and severity of the COVID-19 pandemic.

And it is not just that American evangelicals, with all of their failed predictions about the identity of the antichrist, Trump’s re-election, and the end times in general, missed the arrival of a deadly virus. More importantly, many of them trivialized its arrival, dismissed its severity, while some even denied its reality.

While scientists were inadvertently confirming the prophetic words of the Bible about “pestilences” arising to plague humanity in the last days, some evangelicals were working overtime to discount those same Biblical prophecies in order to protect the reputation of their preferred occupant of the White House.

Instead of taking advantage of the opportunity to show Christ’s love, mercy, compassion, and wisdom to a worried and broken world, far too many evangelicals instead became outraged that the pestilence was receiving too much media attention and making their President look bad!

Amazingly, many of the same Christian leaders who have told us for years that “judgment is coming” and that the “end times are upon us” simply choked when a real pestilence arrived on America’s shores.

Oh, the irony. When evangelicals deny the prophecies found in their own Bibles, how can they expect an unbelieving world to embrace them as true?

And since the  “prophets” are too busy telling lies — and defending those same lies — it would seem that God had to cause the rocks to “cry out” in order for humanity to hear the truth. (Luke 19:40) Specifically, it would appear that God has used the scientists to tell a story that no evangelical seems willing to tell anymore.

Yet another example of science taking the lead where the evangelicals have dropped the ball is on the topic of global warming.

Once again, it is worthy of note that it is the scientific community, not the evangelical community, that has been warning humanity for nearly 50 years that the earth is getting warmer, which will cause an increase in natural disasters.

Both the Bible and scientists are warning the heat will increase, not decrease, in the years ahead. Scientists recently released a new “red alert” warning that the temperature of the atmosphere, land, and oceans is increasing at an alarming rate.

So too, the Bible warns that the heat of the sun will increase dramatically in the last days so that it will “scorch” mankind with “intense heat.” (Revelation 16:8-9)

The Bible says the world is going to get warm as God delivers his judgment upon the world. Science says the earth is getting warm and that extreme heat is a future threat to mankind’s existence. And yet ironically, it is the evangelical Christian who finds himself opposed to the prophecies found in his own Bible regarding the extreme heat that is coming to the earth.

When Christians reject the words and warnings found within their own Bible in order to maintain a rigid allegiance to a particular political or economic worldview, what is left for God to do but cause the rocks to cry out?

Throughout the Bible, we read that God spoke through a burning bush (Exodus 3) and even through a donkey (Numbers 22-24) in order to get the attention of men.

Is it such a stretch to believe that he is speaking to a rebellious world and a backslidden church through science?

What do you think? Share your thoughts and questions in the comments section below.

MP3 Teaching: The Mystery of the Kingdom

VIDEO: Mysteries in the Bible