Ancient history tells a very interesting story about a mother and child which eventually becomes a major motif throughout most world cultures. The mother’s name is Semiramis and her child’s name was Tammuz. In this article, we will focus on the identity of the mother.

According to the historian Eusebius, Semiramis was the wife of Nimrod. In the Sumerian language, her name is “Sammur-amat.”

According to less trustworthy traditions, Semiramis was Noah’s granddaughter, and both the mother and wife of Nimrod. 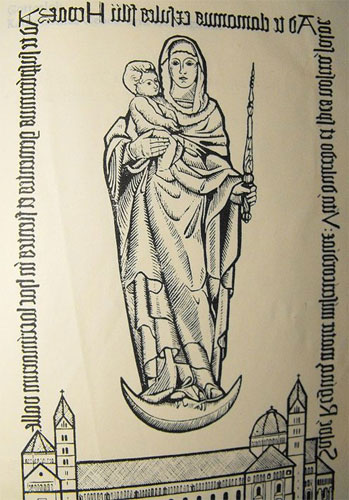 Semiramis – The Mother and Wife of Nimrod

According to various legends, Semiramis became pregnant after engaging in an adulterous affair while married to Nimrod. Around this same time, Nimrod dies a violent and untimely death. In an effort to retain power and to hide her misdeeds, Semiramis makes a most audacious claim. She publicly declares that upon Nimrod’s death he had been resurrected as the god of the sun. As the sun-god, Nimrod used his sun rays to miraculously inseminate Semiramis with a child. This child was thus considered to be divinely conceived. The child’s name was Tammuz, which she claimed was the reincarnated Nimrod. (Thus, Semiramis was both Nimrod’s wife and mother.)

After the scattering that occurs at the Tower of Babel, this story of the miraculous conception of this child disseminated throughout the world and led to the rise of the various birth-death-rebirth cults that are littered through history. These mystery religions of future generations adopted different names for Semiramis and her child, Tammuz.

According to another tradition, Semiramis was the daughter of a goddess. She had mermaid-like features with the head of a woman and the body of a fish.

So exactly who is Semiramis?

In this brief video commentary, Jerry Robinson shares an interesting find while researching the intellectual and mythic origins of the American republic. In particular, a connection between Semiramis and the Statue of Liberty.