Who Was Dorcas in the Bible?

The resurrection of a precious woman named Dorcas in the Bible is a powerful story that shook the ancient city of Joppa.

One of the more beautiful stories in the New Testament is found in Acts 9:36-42 where we learn of a precious Christian woman named Dorcas (or Tabitha, in Aramaic). She lived in the ancient city of Joppa, which was an active seaport city on the Mediterranean Sea and one of the oldest functioning harbors in the world. (Ancient Joppa is now modern-day Jaffa.) 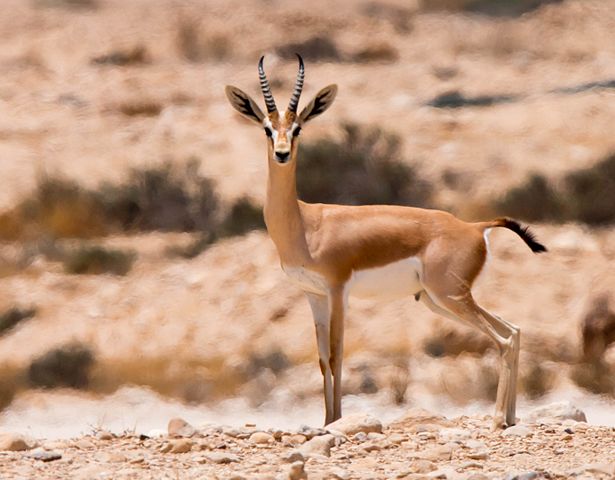 The name Dorcas is a Greek word translated from the name Tabitha in Aramaic. Tabitha means “gazelle”, which is a beautiful and swift animal known for its large bright eyes.

(FYI: Dorcas is the first Greek name of a female in the New Testament.)

While the Bible says nothing of her physical beauty, it does indicate that her life was one spent in service towards those who were less fortunate. She was committed to good works and gave alms to the poor continually.

Indeed, her life of service inspired the 1800’s Dorcas Society and the African Dorcas Association movements, which involved local church volunteers seeking to provide clothing to the poor.

The Blessed Apostle Peter Raised Dorcas (Tabitha) From The Dead

As the Apostle Peter was ministering in the neighboring town of Lydda, Dorcas fell ill and died. According to the custom of the day, her body was bathed and groomed and placed into an upper room awaiting burial. 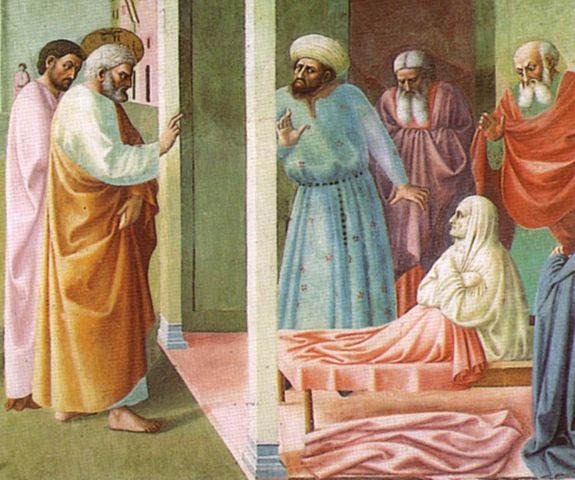 Peter Raised Tabitha (Dorcas) From the Dead. Image: Section of Healing of the Cripple and Raising of Tabitha by Masolino da Panicale, 1425.

However, when the disciples in Jaffa learned that the apostle Peter was in Lydda (which was around a 17-mile journey), they sent two disciples to summon him back to Joppa. Peter did not hesitate to accompany them back. When they arrived in Joppa, the disciples led him to the upper room where Dorcas’ body laid.

As he entered, he was greeted by many grieving widows who wept for Dorcas. They shared stories about Dorcas with Peter, even showing him many of the garments and coats that she had produced while she was alive. While it is not explicit in the text, it is inferred that these widows were the recipients of these gifts woven by the loving hands of Dorcas.

After listening to them, Peter ordered the widows out the room and knelt down and prayed next to Dorcas’ body. Then, he said “Tabitha, arise.” (Tabitha was her name, in Aramaic.)

Upon his utterance, Dorcas opened her eyes and sat up when she saw Peter. He then reached out his hand to Dorcas and she arose from her deathbed. Peter then called for the widows and other disciples and presented Dorcas alive before them all! It must have been a moment of overflowing joy and amazement!

Soon, the fact that the Apostle Peter had raised Dorcas from the dead through the power of the Holy Spirit spread like wildfire throughout the town of Joppa, causing many to trust in the Lord.

There’s nothing like raising someone from the dead to inspire salvations!

You can read the complete Biblical account from Acts 9:36-42 below.

"At Joppa there was a certain disciple named Tabitha, which is translated Dorcas.

This woman was full of good works and charitable deeds which she did.

But it happened in those days that she became sick and died.

When they had washed her, they laid her in an upper room.

And since Lydda was near Joppa, and the disciples had heard that Peter was there, they sent two men to him, imploring him not to delay in coming to them.

Then Peter arose and went with them.

When he had come, they brought him to the upper room. And all the widows stood by him weeping, showing the tunics and garments which Dorcas had made while she was with them.

But Peter put them all out, and knelt down and prayed.

And turning to the body he said, “Tabitha, arise.”

And she opened her eyes, and when she saw Peter she sat up.

Then he gave her his hand and lifted her up; and when he had called the saints and widows, he presented her alive.

And it became known throughout all Joppa, and many believed on the Lord."