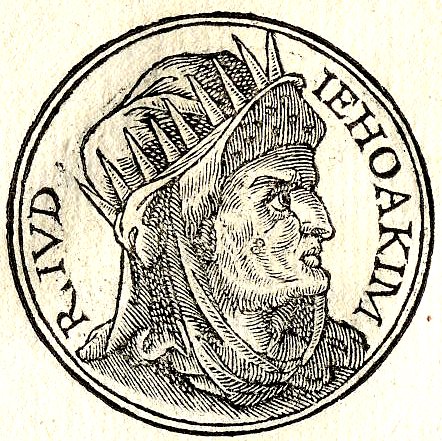 Meaning of Name: “he whom Jehovah has set up”

Highlights of his Reign: Several important events in Biblical history occurred during King Jehoiakim’s reign including: the defeat of the Assyrian empire by the Babylonians at the Battle of Carchemish (605 B.C.), the first Babylonian invasion of Judah, the carrying away of the holy temple vessels from Jerusalem to Babylon, and the burning of Jeremiah’s scroll.

Summary: Jehoiakim (sometimes written as “Jehoikim”) was born in 635 B.C. to his father King Josiah and his mother Zebidah. He was the second born son to his brother, Jehoahaz. Upon King Josiah’s death, Jehoahaz was made King over Judah. But three months into his reign, Pharaoh Neco deposed Jehoahaz and sent him into exile in Egypt, where he later died. In his place, the Pharaoh installed Jehoiakim as king in 608 B.C. The Egyptian ruler also changed his birth name from Eliakim to Jehoiakim. In exchange for making him King, Jehoiakim agreed to exact a heavy tax of one talent of gold and one hundred talents of silver from the people of Judah for the Pharaoh. (2 Kings 23:33-35)

During his reign, Judah remained in a state of tumult as numerous foreign armies battled each other for control of the region. The Kingdom of Egypt, however, was in a state of decline during this time, while the Kingdom of Babylon was growing rapidly after its major defeat of the Assyrian empire. (2 Kings 24:7)

For the first three years of his reign, Jehoiakim served the king of Egypt and paid him a tribute. However, in 605 B.C., Egypt (and Assyria) suffered a massive defeat at the hands of the rising Babylonian empire, under the control of Nebuchadnezzar, at the Battle of Carchemish. During this same time, the armies of King Nebuchadnezzar of Babylon besieged the city of Jerusalem. Jehoiakim immediately surrendered to Nebuchadnezzar and redirected his tribute payment from Egypt to Babylon. However, after paying the tribute for three years, Jehoiakim rebelled against King Nebuchadnezzar and began paying his tribute again to Egypt. (2 Kings 24:1) Soon after, around 599 B.C., the King of Babylon sent numerous invading armies including the Chaldeans, the Syrians, the Moabites, and the Ammonites to punish Jehoiakim and the people of Judah. (2 Kings 24:2)

In the fourth year of King Jehoiakim’s reign, the Lord instructed the prophet Jeremiah to record God’s words against the people and leadership of Judah onto a scroll. When the devastating prophetic judgments of this scroll are brought to Jehoiakim’s attention, he has the scroll thrown into the fire. This story is recorded in Jeremiah 36:1-32.

In his fury against Jeremiah’s damning prophetic words, Jehoiakim orders Jeremiah to be detained. But the Lord hid Jeremiah from the King. (Jeremiah 36:26)

A similar prophecy was issued from another lesser known prophet, Uriah ben Shemaiah. In Jeremiah 26:20-23, we learn that Uriah was able to escape the wrath of Jehoiakim by fleeing to Egypt. But Jehoiakim sent his men after Uriah to capture him and had him brought back to Judah. Upon his return, he was put to death at the hands of King Jehoiakim.

In 598 B.C., Jehoiakim died and his son, Jehoiachin (also known as Jeconiah), replaced him as King of Judah.

“And Pharaoh Neco made Eliakim the son of Josiah king in the place of Josiah his father, and changed his name to Jehoiakim. But he took Jehoahaz away, and he came to Egypt and died there. And Jehoiakim gave the silver and the gold to Pharaoh, but he taxed the land to give the money according to the command of Pharaoh. He exacted the silver and the gold of the people of the land, from everyone according to his assessment, to give it to Pharaoh Neco. Jehoiakim was twenty-five years old when he began to reign, and he reigned eleven years in Jerusalem. His mother’s name was Zebidah the daughter of Pedaiah of Rumah. And he did what was evil in the sight of the LORD, according to all that his fathers had done. In his days, Nebuchadnezzar king of Babylon came up, and Jehoiakim became his servant three years. Then he turned and rebelled against him. And the LORD sent against him bands of the Chaldeans and bands of the Syrians and bands of the Moabites and bands of the Ammonites, and sent them against Judah to destroy it, according to the word of the LORD that he spoke by his servants the prophets. Surely this came upon Judah at the command of the LORD, to remove them out of his sight, for the sins of Manasseh, according to all that he had done, and also for the innocent blood that he had shed. For he filled Jerusalem with innocent blood, and the LORD would not pardon. Now the rest of the deeds of Jehoiakim and all that he did, are they not written in the Book of the Chronicles of the Kings of Judah? So Jehoiakim slept with his fathers, and Jehoiachin his son reigned in his place.” (2 Kings 23:34-24:6)

“And the king of Egypt made Eliakim his brother king over Judah and Jerusalem, and changed his name to Jehoiakim. But Neco took Jehoahaz his brother and carried him to Egypt. Jehoiakim was twenty-five years old when he began to reign, and he reigned eleven years in Jerusalem. He did what was evil in the sight of the LORD his God. Against him came up Nebuchadnezzar king of Babylon and bound him in chains to take him to Babylon. Nebuchadnezzar also carried part of the vessels of the house of the LORD to Babylon and put them in his palace in Babylon. Now the rest of the acts of Jehoiakim, and the abominations that he did, and what was found against him, behold, they are written in the Book of the Kings of Israel and Judah. And Jehoiachin his son reigned in his place.”(2 Chronicles 36:4-8)