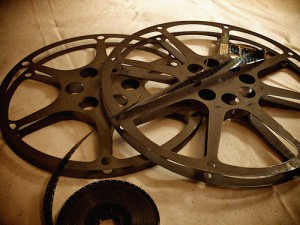 Without knowing exactly how to define what top Christian movies are, we will attempt to create two categories of movies that we believe are well worth watching.

First, we found some great movies that all Christians should watch. Even though these movies were not made strictly by Christians or for Christians, and may not technically be considered top Christian movies, they are mega entertaining and worth your time.

1.  The Truman Show, starring Jim Carrey, is about the life of a man who is unaware that he is living in a constructed reality television show that is being broadcast around the globe.  He becomes suspicious, and embarks upon a journey to find the truth.  The movie includes a creator named Christof who is a God-like figure with a bad attitude.  The Truman Show may not be a top Christian movie, but it is quite enjoyable and will certainly cause a Christian to think.

3.  A Christmas Carol, a well known story written by Charles Dickens, has been put on the movie screen numerous times.  We have enjoyed it every time, not because of how well the movie is made, or because it’s one of the top Christian movies, but because of the amazing story line.  Whether we watch an old British version, an animated film, or a newer movie with great direction and special effects, the message is the same.  Until we discover the true meaning of Christmas, our lives are empty and miserable.  Is that Christian enough to merit viewing?  We would say, yes.

4.  We can’t leave this category without mentioning our personal favorite, Slum Dog Millionaire.  This movie, though devoid of Christian morals and values, does clearly show us why the Bible says to go and share our faith with others less fortunate.  This movie is about a place in the world where Christian witnesses are desperately needed. Watching this movie was not only enjoyable to us, (it had a great story line and was really well made), it tore at our hearts and helped us to see people through the eyes of God.  Slum Dog Millionaire, though not a top Christian movie, is a movie every Christian should see.

The second category of movies we want to give you are the top Christian movies that are made by Christians for Christians.  Some of these movies are very poorly made, but they have great messages for Christians, while some are very well made movies, and will benefit Christians and non-Christians alike.


1.  Passion of the Christ, a controversial movie directed by Mel Gibson and starring Jim Caviezel ( both devout Catholics), is about the last week Christ was on earth.  It is a powerful good versus evil tale, a gripping love story between a man and His mother, and a graphic version of the Bible story all Christians love (rated R).  This top Christian movie may be too traumatic for some viewers, but is loved by many others.


2.  End of the Spear is a top Christian movie about a group of missionaries that were killed by a tribe of headhunters in South America.  Based on a real situation, it sounds like a story with a very sad ending, but the spearing of the missionaries was only the beginning.  The wives of the five men who were killed decided to reach out to the tribe, and most of the tribe are now believers.  A truly uplifting story of how the love of God can conquer all evil and bring salvation to the lost world.


3.  The Chronicles of Narnia, although not technically Christian films in our opinion, are movies based on stories written by C. S. Lewis, a great Christian writer.  The Chronicles of Narnia are stories about a world hidden to most people, a world where good and evil are constantly battling.  Most Christians see that the stories parallel the Bible, and are great movies for children.


4.  The Ten Commandments, an epic adventure movie about Moses and the Children of Israel’s exit from Egypt, is probably the greatest Christian movie of all time.  Directed by Cecil B. Demille, the movie was made in the 1950’s at the height of the American hatred for the atheist attitudes of Communist Russia.  It is unusual to say the least, but is always a great experience for most Christians.  It is the classic Bible movie of the 20th century.

There are many different opinions about which movies deserve the title of the top Christian movies of all time.  People even disagree on what makes a movie a “Christian movie.”  With that in mind, we won’t try to promote movies as top Christian movies, but just movies that are fun to watch and thought provoking as well.