Random Notes on the Table of Nations

This evening I am teaching in my home church from Genesis 10. This chapter contains the genealogy of Noah’s three sons, Shem, Ham, and Japheth.

In the aftermath of the ancient Flood, the future of humanity would now spring from one of these three men.

Below is a visual representation of Noah’s genealogy as described in Genesis 10. This chart is often referred to as the “Table of Nations.” 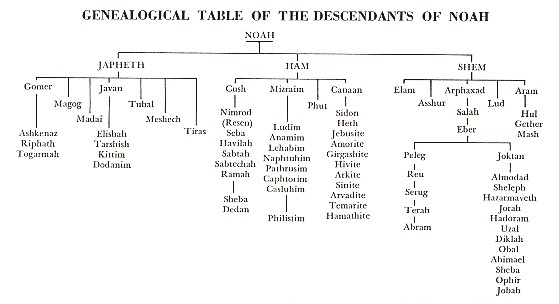 All together, this genealogy contains a list of 70 descendants from Noah.

While Genesis 10 may seem insignificant in comparison to the major events that surround it (the Noahic covenant of chapter 9 and the Tower of Babel in chapter 11), it contains several important clues for the student of Bible prophecy.

The Descendants of Japheth

Among the descendants of Japheth we see familiar names like Gomer, Magog, Tubal, Meshech, Togarmah, and Tarshish.

The sons of Japheth:
Gomer, Magog, Madai, Javan, Tubal, Meshek and Tiras.
The sons of Gomer:
Ashkenaz, Riphath and Togarmah.
The sons of Javan:
Elishah, Tarshish, the Kittites and the Rodanites. (From these the maritime peoples spread out into their territories by their clans within their nations, each with its own language.)

In the final years of the divided kingdom of Israel, God raised up prophets with visions and prophecies that contained several of these ancient names. While we may know very little personal details about these ancient ancestors, archaeology has helped us determine where they lived. And this is vital to understanding Bible prophecy. For more, check out this interesting read.

The Descendants of Ham

“The sons of Ham:
Cush, Egypt, Put and Canaan.
The sons of Cush:
Seba, Havilah, Sabtah, Raamah and Sabteka.
The sons of Raamah:
Sheba and Dedan.
Cush was the fatherc of Nimrod, who became a mighty warrior on the earth. He was a mighty hunter before the Lord; that is why it is said, “Like Nimrod, a mighty hunter before the Lord.” The first centers of his kingdom were Babylon, Uruk, Akkad and Kalneh, ind Shinar. From that land he went to Assyria, where he built Nineveh, Rehoboth Ir, Calah and Resen, which is between Nineveh and Calah—which is the great city. Egypt was the father of the Ludites, Anamites, Lehabites, Naphtuhites, Pathrusites, Kasluhites (from whom the Philistines came) and Caphtorites. Canaan was the father of Sidon his firstborn, and of the Hittites, Jebusites, Amorites, Girgashites, Hivites, Arkites, Sinites, Arvadites, Zemarites and Hamathites. Later the Canaanite clans scattered and the borders of Canaan reached from Sidon toward Gerar as far as Gaza, and then toward Sodom, Gomorrah, Admah and Zeboyim, as far as Lasha.

These are the sons of Ham by their clans and languages, in their territories and nations.”

Among the descendants of Ham we are introduced to familiar names like Cush, Egypt, Put, Canaan, Sheba and Dedan. Many of these, too, play a role in future prophecies.

But one name stops Moses in his tracks as he writes the genealogy: Nimrod.

READ: WHO WAS NIMROD?

Nimrod plays a unique role in the years that follow the Flood. His attempts at world domination are emphasized in Genesis 10:8-12.

“Cush fathered Nimrod; he was the first on earth to be a mighty man. He was a mighty hunter before the LORD. Therefore it is said, “Like Nimrod a mighty hunter before the LORD.” The beginning of his kingdom was Babel, Erech, Accad, and Calneh, in the land of Shinar. From that land he went into Assyria and built Nineveh, Rehoboth-Ir, Calah, and Resen between Nineveh and Calah; that is the great city.”

The Descendants of Shem

Finally, there are the descendants of Shem, including Elam, Asshur, and Aram.

“To Shem also, the father of all the children of Eber, the elder brother of Japheth, children were born. The sons of Shem: Elam, Asshur, Arpachshad, Lud, and Aram. The sons of Aram: Uz, Hul, Gether, and Mash. Arpachshad fathered Shelah; and Shelah fathered Eber. To Eber were born two sons: the name of the one was Peleg, for in his days the earth was divided, and his brother’s name was Joktan. Joktan fathered Almodad, Sheleph, Hazarmaveth, Jerah, Hadoram, Uzal, Diklah, Obal, Abimael, Sheba, Ophir, Havilah, and Jobab; all these were the sons of Joktan. The territory in which they lived extended from Mesha in the direction of Sephar to the hill country of the east. These are the sons of Shem, by their clans, their languages, their lands, and their nations.”

Genesis 10 calls Shem the “father of all the children of Eber.” “Eber” is the likely root word for “Hebrew.” This means that Shem is the steward of the Messianic lineage.

Although biblical genealogies can often seem dry and pointless, they actually contain rich source material for unlocking many of the Bible’s greatest mysteries. Particularly in Genesis, the presence of a genealogy almost always precedes a major event.

So too, the genealogy of Genesis 10 immediately precedes the rise of the Tower of Babel and the scattering of nations through the confusion of languages.

Every sentence within the Bible has meaning. Every word is in its proper place. It is a masterpiece filled with hidden gems for those willing to mine its riches.