The Barabbas Deception: Which Jesus Would You Choose?

In this brief video Bible commentary, Jerry Robinson re-examines the powerful story of Barabbas, as recorded in the four gospel accounts of the New Testament.

VIDEO: The Barabbas Deception – Which Jesus Would You Choose?

This video is an excerpt from our full-length teaching entitled: Which Jesus Do You Serve?.

On the day Christ was condemned to death, the Jews were presented with the choice of two different men.

One would receive clemency and be set free. The other would die a gruesome death.

One was a silent lamb that was led to the slaughter.

The other was a violent rebellious zealot who was actively using the sword to “take Israel back for God” from the defiling hands of the pagan Roman infidels.

The Pharisees, who sat in Moses’ seat, were supposed to herald the coming of Messiah. Instead, they traded one Jesus for another when given the opportunity.

The story of a little known man named “Jesus Barabbas” is remarkable as it emerges from the Biblical texts. The story of Barabbas appears in all four gospels.

Read about Barabbas in the Bible:

To the Pharisees, Jesus became a useful tool in breaking one of their nation’s “patriots” out of jail: Barabbas.

As the crowds stood before Pontius Pilate, they were asked whether they wanted Jesus of Nazareth released or Barabbas released. The maddened crowds, encouraged by the corrupt religious leaders, yelled: “Give us Barabbas!” (John 18:40)

The very name “Barabbas” is intriguing as it literally means “son of the father.” 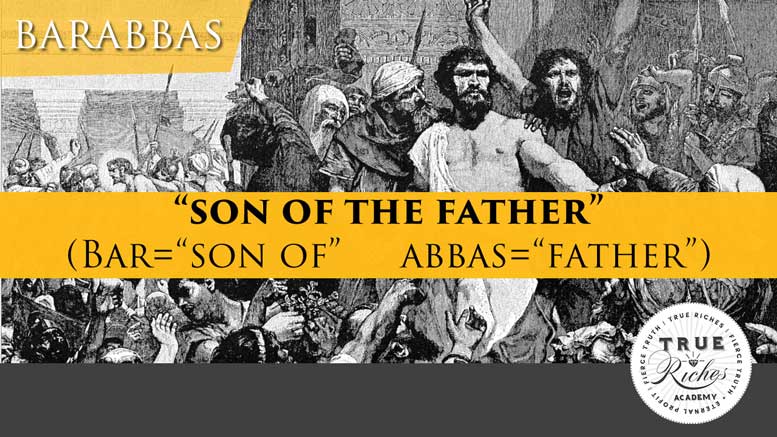 Herein lies the irony. As Jesus Christ of Nazareth, Israel’s true Messiah and the “Lamb of God,” stood before His own people at Passover, they demanded his death. They preferred another man, known as “son of the father.” Interestingly, some early translations of the Gospels (in particular, the Aramaic and the Jerusalem Syriac translations) list Barabbas’ first name as “Jesus.”

According to the 1906 Jewish Encyclopedia:

“Abba” is used in the name “Barabbas” as a common noun, whereas “Abba” is found as a prae-nomen as early as tannaitic times (Yeb 15a). If “Abba” were merely a title of Barabbas’ father, his name could not have been simply “Son of Abba.” In fact, Origen reports that in several manuscripts of the Gospels he had seen the name given as “Jesus Barabbas” or “Jesus, son of Abba.” Accordingly, the first name was afterward omitted from the manuscripts of the gospels when the name of Jesus had become sacred. (The Jewish Enc. 2:513)

This name “Jesus Barabbas” still remains in some modern translations, including the NIV and the NET Bible.

– Barabbas is mentioned in all four gospels.

– He was a Jewish rebel, known as a Zealot, and a “notable prisoner,” imprisoned for participating in a murderous insurrection against the Roman Empire.

– Pontius Pilate freed Barabbas from prison, as was his “custom at passover,” after the Jewish crowd demanded his release.

– Barrabbas’ first name was Jesus, which adds an interesting dimension to the Biblical account of Pilate’s offer to release one man at passover.

The Pharisees had the written history, the psalms, the proverbs, and the prophets. According to Jesus, these religious rulers sat in the “seat of Moses.” (See Matthew 23:2)

And yet, when given the choice, they chose wrong.

But the deception lies in the fact that they did indeed choose a “Jesus.”

They just chose the wrong one!

Imagine yourself in the crowd that day as these two men were presented for a democratic vote.

One would receive clemency and be set free. The other would die a gruesome death.

Would you make the right choice? What would have enabled you to go against the mob mentality, especially when it was endorsed and sanctioned by the most important religious leaders?

An interesting thought experiment and meditative food for those so inclined.