Judaism 101: Do Jews Believe in Jesus?

Do Jews believe in Jesus? Yes. They believe He is one of the many false Messiahs who has tried to deceive God’s people down through the years.

According to the Christian faith, Jesus is the Messiah that was prophesied about in the Old Testament. He is perfect God and perfect man, sinless, born of a virgin, crucified, and resurrected to live again. Why can’t Jews just see our point of view and believe? 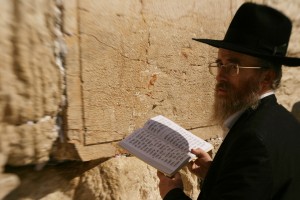 Do Jews believe in Jesus?

There are several reasons for the adamant unbelief of Jewish people. Not only do they think that Jesus did not fulfill all of the Old Testament prophesies about the Jewish Messiah, they don’t even think Jesus was an important part of Jewish history. He was just another man in a long line of such men who sought fame by making false claims.

Do Jews believe in Jesus?

Jews don’t believe that Jesus was divine, but even if He was, they don’t believe that the Messiah will be anything more than just a regular man that is specially chosen by God to fulfill the prophesies.  He will have an earthly mother and father, and there will be nothing special about his birth.  He will live and die like any other man, and will not be resurrected any differently than anyone else.  Christians say that Jesus was born fully divine (God) and fully human (Mary).  Do Jews believe in Jesus?  According to Jews, He was not the promised Messiah.

Jews believe that the Messiah will be a direct descendant of King David through an earthly father.  They say there is no evidence that Jesus was that direct descendant, so it doesn’t matter that Jesus performed many miracles including healing the sick and raising the dead.  Do Jews believe in Jesus?  Even if God allowed Him to do these mighty works, He was not the Messiah promised.  After all, He did not come as an earthly king from the house of David to rule over all of Israel.

Jews believe that the Messiah will bring all Jews back to Israel, rebuild the temple, and bring peace on earth.  They don’t think they need a savior, but someone to restore Israel back to its glory days.  Do Jews believe in Jesus?  Since Jesus didn’t bring the Jews back to Israel and restore the nation while He was alive, they say He can’t possibly be the Messiah promised in the Old Testament.

Jews absolutely do not believe in Jesus.  Jesus has no more importance in Jewish beliefs than Julius Caesar or Mohammed.  If we asked a Jew to believe that Caesar was the Messiah promised by God, it would make just as much sense to them.  The Jewish beliefs were firmly in place many centuries before Jesus came on the scene, and His life is not considered to even be worth discussing.

The Jews are faithfully watching and waiting for the promised Messiah today.  They are still attempting to follow the Laws of Moses for their salvation, and continuing their cultural traditions to try to please God.

Did God send Jesus to bring salvation to the Jews?  YES, HE DID!!

Have they accepted this free gift from God?  NO, THEY HAVEN’T!!