Do You Agree With America’s Founders About Jesus Christ?

America’s Founders vs. The Biblical Jesus

Since finding Christ in 1994 I have been largely confounded by the calls of sincere fellow believers in their zeal to put “God” back into “America.”

Just tune into virtually any Christian conservative talk radio station in America and you are bound to hear phrases like: “We need to get God back into America again…” or “Our nation has turned its back on God…” or “We are engaged in a culture war and need to stop the liberals from destroying our country’s Judeo-Christian heritage!”

As I have surveyed the landscape of this pervasive idea of America as a wayward “Christian” nation, I have found the underpinnings of this argument to be embarrassingly idealistic at best and deceptively erroneous at worst.

While it is indisputable that many, if not most, of America’s early founders, were sympathetic to some form of Christianity, it is also clear that few of them believed the Bible to be the literal Word of God.

According to founding father John Adams: 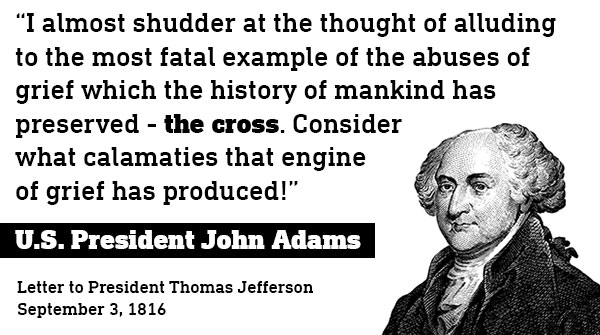 “I almost shudder at the thought of alluding to the most fatal example of the abuses of grief which the history of mankind has preserved – the Cross. Consider what calamities that engine of grief has produced!”

The man’s writings speak for themselves. The problem is that most modern founding-era apologists have never read them.

The Author of the Declaration of Independence vs. Jesus Christ

Let’s turn now to our most Epicurean founding father Thomas Jefferson who considered the Gospels to be utter nonsense:

“We discover in the gospels a groundwork of vulgar ignorance, of things impossible, of superstition, fanaticism and fabrication. Among the sayings and discourses imputed to him by his biographers, I find many passages of fine imagination, correct morality, and of the most lovely benevolence; and others, again, of so much ignorance, so much absurdity, so much untruth, charlatanism and imposture, as to pronounce it impossible that such contradictions should have proceeded from the same being. I separate, therefore, the gold from the dross; restore him to the former, and leave the latter to the stupidity of some, the roguery of others of his disciples. Of this band of dupes and imposters, Paul was the great Coryphaeus, and the first corruptor of the doctrines of Jesus. That Jesus did not mean to impose Himself on mankind as the Son of God, physically speaking, I have been convinced by the writings of men more learned than myself in the lore.”

They probably skipped that unfortunate quip in your last Sunday school class on God and country.

And I seriously doubt President Jefferson’s trash-talk on Jesus, Paul, and the Bible would score him any points in any modern evangelical Sunday school class.

Nevertheless, Jefferson passes as a “Christian” to most American Protestants.

It’s an interesting sleight of hand.

In a letter dated from 1822, Jefferson predicted that the Unitarian faith would totally dominate the young country within a generation:

“I rejoice that in this blessed country of free inquiry and belief, which has surrendered its creed and conscience to neither kings nor priests, the genuine doctrine of one only God is reviving, and I trust that there is not a young man now living in the United States who will not die an Unitarian..”

For those unfamiliar with the beliefs of Unitarianism, it is a Christian religious denomination that believes God is only one person. “Unitarians reject the Trinity and do not believe that Jesus Christ was the Son of God. Followers of Unitarianism also do not accept the concepts of original sin and of eternal punishment for sins committed on earth.”

Jefferson’s hope that “the present generation will see Unitarianism become the general religion of the United States” ultimately failed to materialize. But his radical democratic experiment did succeed in hastening further divisions and fractures in the Christian church.

Not only has American Protestantism been systematically fractured into many pieces, shattered by endless disputes over doctrine and authority, so too, its racial divide still remains.

Sadly, Sunday morning is still the most segregated day of the week in America.

I have learned that if you want to understand the founder’s thinking, you must look less to the Bible (especially the New Testament) and much closer at ancient Greco-Roman history and to Enlightenment thinkers like John Locke, Montesquieu, and Spinoza.

As if his sentiment were unclear about his disdain for the so-called miracles attributed to Jesus, Jefferson wrote this to his friend John Adams three years later:

“The truth is, that the greatest enemies of the doctrine of Jesus are those… who have perverted them to the structure of a system of fancy, absolutely incomprehensible, and without any foundation in his genuine words. And the day will come, when the mystical generation of Jesus, by the Supreme Being as his father, in the womb of a virgin, will be classed with the fable of the generation of Minerva in the brain of Jupiter.”

For Jefferson, Christ was a good man but not God. And his mother was certainly not a virgin.

This is not spiritual blindness. This is outright blasphemy.

As to his philosophy on life, Jefferson pledged clear allegiance to Nature’s God, the same god referenced in our founding documents, but first by ancient pagan philosophers like Epicurus.

As Jefferson puts it:

“I am an Epicurean. I consider the genuine (not the imputed) doctrines of Epicurus as containing everything rational in moral philosophy which Greek and Roman leave to us.”

Interestingly, the Bible records a brief encounter between the Apostle Paul and a group of Epicurean philosophers during his ministry in Athens.

Some of the Epicurean and Stoic philosophers also conversed with him. And some said, “What does this babbler wish to say?” Others said, “He seems to be a preacher of foreign divinities” — because he was preaching Jesus and the resurrection. (Acts 17:18)

The Primary Promoter Of The American Revolution vs. Jesus Christ

Another pivotal American founder/activist, Thomas Paine, created a groundswell of support for the American Revolution through his pamphlet, Common Sense, which was an instant best-seller. When not fanning the flames of rebellion against monotheistic Christian monarchies, Paine would often opine on the Christian religion. In his incredibly blasphemous book, The Age of Reason; Being an Investigation of True and Fabulous Theology, Paine systematically attacks the Bible as the revealed Word of God while promoting deism to the masses.

“It is the fable of Jesus Christ, as told in the New Testament, and the wild and visionary doctrine raised thereon, against which I contend. The story, taking it as it is told, is blasphemously obscene.”

John Adams and Thomas Jefferson both rejected the doctrine of the Trinity and the divinity of Jesus.
(But, I guess aside from that, if you really still insist, you can call them “Christians.”)

As former Europeans, the American revolutionaries were eager to prevent the “tyranny” of monotheistic Christian monarchy from encroaching upon their vision of a new and tolerant society that replaced duties to a divinely appointed king (Rom. 13:1-7) with individual rights created as modern constructs and attributed to “Nature’s God” for good measure.

Initially, it was only self-evident that white men were created equal.

That is, when America’s founders extended the “God-given” rights of life, liberty, and the pursuit of happiness to America, it was never intended to apply to those who were black, native American, Mexican, or women.

Until being prohibited at the federal level, several colonies used religious tests for political office.

Thomas Jefferson, in his haste to disconnect any tentacles between church and state that resembled the Church of England, promoted an idea of “religious freedom” and “toleration” for citizens of all faiths in early America.

According to Jefferson, in America “the Jew and the Gentile, the Christian and Mahometan, the Hindoo, the infidel of every denomination” were now, 1800 years after the birth of Christ, granted complete freedom to worship as they wished.

The founders ensured that no one would be able to tear down another false god again… ever.

While no god is specifically endorsed, none are prevented, in direct conflict with the first of the 10 Commandments given to Moses:

“You shall have no other gods before Me.”

Conclusion: America’s Founders Had A Disdain For Biblical Christianity

While the America of the 1700s was certainly more pious than our current generation, many of America’s most important founders had little more than a “form of godliness” while “denying its power.” (2 Tim. 3:5)

– GEORGE WASHINGTON, America’s first president, George Washington, refused Holy Communion, and the name of Jesus Christ appears not even once in the vast collection of his published letters.

– JOHN ADAMS, America’s second president, denied both the doctrine of the Trinity and the divinity of Jesus and had a distinct disdain for the message of the Cross. In a letter penned two days after Christmas in 1816 to his life-long friend F.A. van der Kemp, Adams confesses: “As I understand the Christian religion, it was, and is, a revelation. But how has it happened that millions of fables, tales, legends, have been blended with both Jewish and Christian revelation that have made them the most bloody religion that ever existed?”

– THOMAS JEFFERSON, the author of the Declaration of Independence and America’s third president, did not believe that Jesus Christ was the Son of God nor that He was born of a virgin. He believed none of the miracles attributed to Christ, thereby denying the authority of Holy Scripture.

– JAMES MADISON, the author of the U.S. Constitution and America’s fourth president, favored the natural religion of deism over Protestantism. Madison’s thoughts about historic Christianity were summed up well when he reflected upon the fruits of the last 1500 years of Christianity. According to Madison, the answer was “superstition, bigotry, and persecution.”

Let no one suggest that America’s founders had nothing to say about Jesus Christ.

Instead, it is more accurate to say that they simply did not believe the most audacious claims about Him. The evidence is clear that many did not trust in His virgin birth, His miracles, His resurrection, and His free offer of salvation to those who repent of their sins and pursue righteousness according to all of the revealed truths espoused in New Testament.

15 Questions For Those Who Believe America is a ‘Christian’ Nation

What Are The Moral Lessons of the American Revolution?

TEACHING: Is America a Christian Nation?

The “Biblical” Roots of American Racism