21 Kingdom Principles To Meditate On 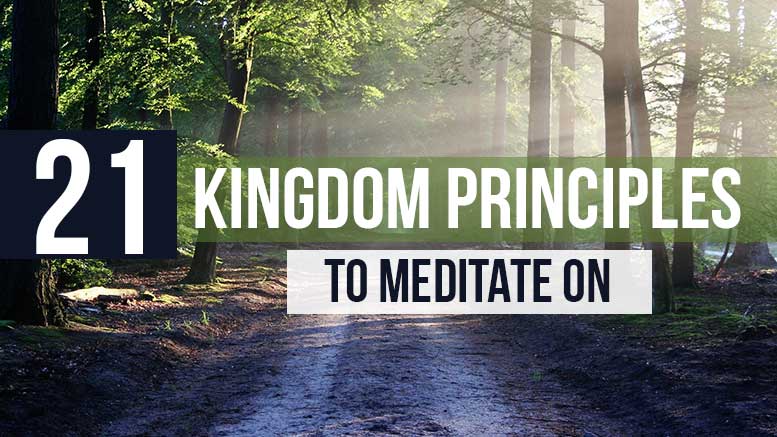 The Bible is clear that our Creator God rules as King over all of creation.

As a King, it is only fitting that our Creator has a Kingdom.

When we are “born again” through a profession of faith in Jesus Christ as the Son of God, we gain entrance into God’s Kingdom. In addition to becoming full-fledged citizens of that Kingdom, we also become joint-heirs with Christ to rule as kings and priests under the headship and authority of King Jesus.

For millennia, the world was largely ruled by kings and kingdoms under various forms of monarchy. In the West, the political system of monarchy was overthrown in the wake of the Protestant Reformation, the Enlightenment, and several resulting revolutions (such as in the U.S. and France).

Because the concept of kingdom (monarchy) is all but foreign to the modern Western mind, it is advisable for modern Christ-followers to spend time pondering the “kingdom” concept so as to apprehend what the Bible has to say about our true government.

The Kingdom of God is not a democracy. It is a rule of One will, not the will of many.

As kings and priests to God, we rule only in God’s name and serve God alone as our King.

Here are 21 principles that I have found in my own Bible study. Consider and ponder them for they are principles about man’s only hope: God’s Kingdom.

21 Kingdom Principles For Christians To Meditate Upon

1. A kingdom is the domain of a king and is the realm of his sovereignty.

4. The kingdom of God belongs to those who are aware of their extreme spiritual poverty. (Matt. 5:3)

5. The kingdom of God also belongs to those who are persecuted for doing right. (Matt. 5:10)

6. The highest position of rank in the kingdom of God belongs to those who keep God’s commandments. (Matt. 5:19)

7. The lowest position of rank in the kingdom of God belongs to those who fail to keep God’s commandments. (Matt. 5:19)

8. If your righteousness is not greater than that of the Scribes and Pharisees, you cannot enter the kingdom of God (Matt. 5:20)

10. All of man’s basic necessities will be met when he pursues the kingdom of God above all else. (Matt. 6:33)

11. On the day of judgment, many lawless individuals will demand entry into God’s kingdom but they will be rejected for failing to pursue the will of God with their life. (Matt. 7:21)

15. Through parables, Christ revealed the mysteries of God’s kingdom. But only those with eyes to see and ears to hear could apprehend those mysteries. (Matt. 13:10-13, Mark 4:11)

18. The Kingdom of God enjoys exponential growth though it began as the size of a mustard seed (Matt. 13:31-33)

19. At Christ’s return, He will command His angels to gather up everything in His Kingdom that causes sin and all who do evil and to cast them into a fiery furnace. (Matt. 13:42,43)

21. The Kingdom of God is like a fisher’s net that is cast into the sea gathering up both good and bad. When the catch is drawn in, the good will be collected for the Master’s use while the bad will be cast into the fiery furnace. (Matt. 13:47-50)