Dividing the Land of Israel for Gain

There is a common belief among many Westerners that the current cycle of chaos and violence in the Middle East is completely unavoidable. Some falsely believe that the regional turbulence has come simply as a result of Muslims being a violent people. (This view often finds its roots in a particular interpretation of Gen. 16:12) However, since World War I, history demonstrates that Western nations bear much of the blame for the destabilization and violence of the region.

Sadly, many modern Bible prophecy students have attempted to interpret prophetic verses and current events through their own cultural lens. A proper discernment of the prophetic scriptures, however, can only come when we are willing to toss aside our own heavily-ingrained-from-birth cultural beliefs, which are typically rooted in one-sided versions of history — as told by the victors.

Our environment, and our view of that environment, greatly impact our ability to discern the many prophetic texts found in the Bible.

There are few prophetic topics that have been more mishandled by modern day Christians than that of the nation of Israel.

What does Israel mean to you?

Our conceptual understanding of the word “Israel” either agrees with God’s or with the world’s. Please read on…

How does God define “Israel?”

The sovereign state of Israel most certainly exists and indeed thrives today. By a miracle, Israel has developed one of the most advanced and flourishing economies in the world in their short modern-day existence. Many American Christians, and especially Bible prophecy followers, get excited about modern-day Israel and jump at every chance to defend her. But is this truly the land that God promised to Abraham? Scripture tells us that it is not even 10% of the Promised Land.

“Every place on which the sole of your foot treads shall be yours: from the wilderness and Lebanon, from the river, the River Euphrates, even to the Western Sea, shall be your territory.” – Deuteronomy 11:24

When the Lord made his everlasting covenant with Abram, He clearly demarcated the borders of His land, saying:

“To your descendants I have given this land, from the river of Egypt to the great river, the River Euphrates— the Kenites, the Kenezzites, the Kadmonites, the Hittites, the Perizzites, the Rephaim, the Amorites, the Canaanites, the Girgashites, and the Jebusites.” – Genesis 15:18-21

These two passages tell us that Israel is in fact much of the modern-day Middle East region, including: 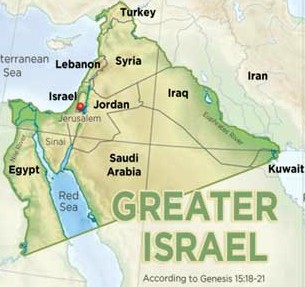 According to a literal reading of the Bible, this is God’s land.

Technically speaking, when a nation’s military drops a bomb on western Iraq, they are bombing “greater Israel.”

True, or not true?

Most good history students know that in the post-World War I era, Western nations secretly carved up this exact area for gain through the Sykes-Picot treaty.

Men drew lines on maps and declared the birth of nations on a whim. We have created such man-made borders, not only within Greater Israel, but also across the entire globe.

Some may still choose to believe that God is impressed with the borders that mankind imposes upon itself. But scripture affirms that “the earth is the Lord’s.” (Ps. 24:1) He does with what He wishes. His will and authority are not bound by the man-made lines cleverly scribbled on a world map — including those borders so hastily created under the Sykes Picot treaty.

Interestingly, many American Christians believe they are somehow Biblically mandated to “protect” the man-made borders that surround our nation while completely ignoring the only borders that God truly recognizes in His Word… Namely, those of Greater Israel!

Every other border created under heaven has been man-made. If you believe the Bible, only Israel’s borders have been clearly dictated by God Himself. After all, it is His land.

Christians have been convinced that when the Ottoman Empire carved up the land in prior centuries, it was a “bad” thing. Later, when the West carved up the same land, it was considered “good” for the region.

Do you think God is impressed with the Western re-creation of greater Israel?

As God’s people, it is imperative that we cling to only one truth regarding Israel. That is, God’s truth.

Allow me to bring this to its logical conclusion…

Today, we are witnessing the complete collapse of Sykes Picot.

In recent months, Islamic militants have retaken much land that was divided for gain by the West after World War I. Considering that God has used terrible dictators and tyrants in the past to accomplish his will concerning Israel (i.e. Pharaoh, Nebuchadnezzar, Cyrus, etc.) how do we know that God is not using ISIS to tear down the borders previously imposed upon His land by Western powers?

In order to truly value and bless God’s nation, we must stop bringing destruction upon the land that belongs to God.

The West did not do Israel a favor by carving up the land of “Greater Israel” and giving 90% of it to Muslims and 10% to the Jews.

In this current deceptive environment, Bible prophecy students do well to and look solely to the Word of God for prophetic insight.